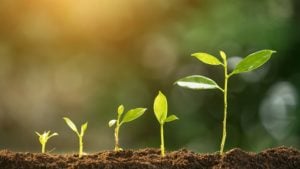 Recognize that growth continues, despite our best efforts to prevent it.  There’s a saying: God’s time and mortals’ time differ. Nowhere is that more true than in the area of personal growth. Growth can be likened to fermentation; it often occurs well below the surface and appears dormant for long periods. Still, much is going on, if only we have the good sense to realize it. And, there ARE things we can do to break through the surface layers…

Engage in the process; give up being stuck on the outcome.  We live in a results-oriented world. That’s both good and bad. In the short term, it enables us to get more done faster. In the long term, however, it conceals a great life truth: ultimately, ALL is processed, and as we engage in the process and relinquish our obsession with results, the results occur spontaneously, easily. To be involved fully in the process is to be fully in the present.

Work on one thing at a time.  High achievers and type A’s pride themselves on their ability to keep several balls in the air at one time. For many, it works, but there is a price. Multi-tasking, as it’s come called, splits your focus, reduces the energy devoted to any single task, and–when the balls mysteriously begin to get out of control–leaves the serious multi-tasker at a loss for words or acts. But to work on one thing at a time is tantamount to enjoying the beauty of a single rose, savoring the clean clear taste of cold spring water, and feeling the exhilaration of a new day. Single-tasking gets the body and the mind going again, inspires and invigorates.

Follow your path rather than your plan.  The distinction relates to specificity. Paths are often winding, indistinct, and surprising in where they lead. Plans are clear, definite, and designed to eliminate the uncertainty. To follow a path is to be open to discovery, to the sudden turns that yield joy, insight, and challenge. But, to really follow a path requires courage and a willingness to give up certainty. To follow a path is to go forward when you can see only a single step ahead, confident that the next step will appear.

HEAR what is being said.  Have you ever had a friend offer you some unwelcome advice and preface it with, “You’re not going to want to hear this, but …” Well, often when new information comes to us that conflicts with what we know, believe, think, or want, we DON’T hear it. Even while we’re “listening”, we’re preparing our replies, defenses, and rebuttals. In short, we’re blocking our chance to learn. To “hear”, as opposed to simply listening, is to refrain from judgment, to go beyond the actual words, and to really be open to the possible lesson that may be lurking just beneath the surface. the difference between listening and hearing is that, somewhere in between, there’s a filter, and it’s usually our resistance to new and sometimes conflicting information.