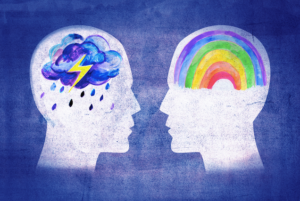 “Self-respect is the fruit of discipline; the sense of dignity grows with the ability to say no to oneself.” – Abraham J. Heschel

When you consider that you spend infinitely more time with your “self” — listening to your internal dialogue – than you do to any other person in your life, it pays to have it on a leash!  What you say to yourself in your head goes on 24/7. When you think about it, this is tremendously more input into your life than any other person could possibly have.

Your self-talk takes place in real-time.  It’s a running commentary. If it’s good self-talk, that’s the best ‘friend’ you can have. If it’s the ‘idiot in the house’ instead, you’re stuck with crazy, negative, self-defeating statements going on all day long: “I could never do the math,” “I’m too fat,” ” Everyone’s smarter than me,” “I’ll never make any money,” “I’ll never be a success,” etc. (And of course, such statements tend to become self-fulfilling.)

Your body reacts as if your self-talk were real.  What you say to yourself in your head has physiological outcomes, i.e., when you think “This patient is never going to accept my recommendations for care…” your palms sweat, your heart beats faster, adrenalin clouds your thinking, and your function less effectively and put your body under tremendous stress. This makes it difficult for you now and then creates habitual thought patterns that kick up in the future, and there’s cumulative stress.

Negative self-talk gets the loudest when you need it the least.  When the pressure’s on, you will tend to revert to default mode. For instance, everyone has one side of the brain dominant, and can and does use both hemispheres, but when learning something new, which is stressful, you will default to the dominant hemisphere. By the same token, when feeling stressed you hype up the negative self-talk, which is — to say the least — self-defeating. You’re bringing in the negative self-talk because you think we can’t do something, then it tells us you can’t do something, and then you make sure you can’t!

You talk to yourself in ways you would never think of talking to someone else.  If you walked up to someone else and said “You’re stupid and worthless” they would recoil in horror and pain, or lash back at you with verbal or physical abuse. However, it’s not uncommon to have that kind of self-talk going on. You know in your heart that if you talked to someone else this way, it would exacerbate the situation, and not solve anything, as well as being unkind and possibly untrue; and yet we sometimes talk that way to ourselves.

Ultimately if you have negative self-talk you create a toxic internal environment.  Considering that self-talk goes on 24/7 and that many people aren’t consciously aware of it — or aware that it isn’t a “given” and can be changed — as the months and years go by, you create a sort of closed-loop toxic waste area. In the worst-case scenario, every time you dip in, you pull up something negative and self-defeating, and defeat yourself, and then throw that back into the cesspool. You need to listen to your body because it for darn sure listens to you.  Such a toxic inner environment is what causes headaches, pain, depression, anxiety, poor functioning, and a self-defeating spiral into self-defeat. Any degree of negativity from yourself to yourself is more than you need. It’s like your authentic self crying “Help me! Get me out of here!”

Your ‘real’ self knows that you’re competent, intelligent, motivated, prepared… and it’s trying to function with negative self-talk. This creates tension.    Coaching can help turn this situation around by helping you become aware of your self-talk, and helping you change it to get it in sync with reality!   And check to make sure someone in your current environment isn’t feeding you negative self-talk ideas!